The event featured two races in each class: a short course event and a longer desert race. In Pro Production, Granlund went 5-2 to finish third overall in his supercharged Yamaha. He was second overall in Pro Stock on the merit of a 2-2 performance. Interestingly, he ran the same setup in both races.

“I had a second, a fifth, a second and a second, which is pretty good,” said Granlund. “Running four races in one day is tough, but the cars held up great. My Yamaha was working great and the GBC tires hooked up. With so many events in one day, the course got rough, but my FOX shocks helped me glide over the rough stuff and really worked well in the rhythm sections. I had a great weekend.” 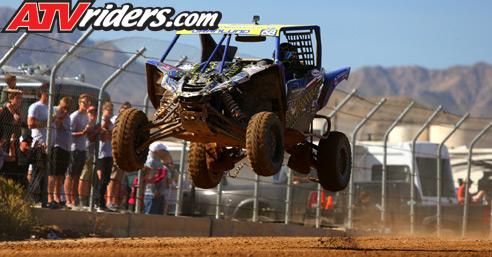 Granlund finished out the season third in Pro Production points and was fifth in the Pro Stock Championship. He plans to return in 2019 and again run both classes.

“The year started out great, but midseason I had some minor mechanical problems,” said Granlund. “They were all little things; things we couldn’t have predicted would be problematic. So we’ll take what we learned and use it for next year. I’m really happy with my program.”

Murray finished out the season in SXS 1000 with an 11th-place finish in short course and a fourth in the desert race. In his first full year in the series, Murray finished third in points against some serious competition.

“I had a lot of help from STV to get here,” said Murray. “A couple of DNFs made it more difficult on us, but we pulled it off. Andrei at STV has been pivotal this year. I couldn’t have done it without STV.

Granlund and Murray will be back at it when the WORCS Series kicks off its 2019 season January 26-27th back at Buffalo Bill’s Casino.