Bakersfield, CA (11/8/2018) – Bad luck sidelined H&M Motorsports’ David Haagsma during the season finale WORCS SXS Pro Production race. After leading the championship for most of the season, mechanical issues in the final events dropped him to second in points.

“I had an overheating problem in the short course race and I dropped 12 points,” said Haagsma, who won two races and scored two additional podiums during the 2018 season. “In the desert race, I started second and took the lead on the first lap. I got a gap on everyone, but I had an electrical issue. Once we figured it out, it was good for the rest of the race. It was something we’d never had happen and it was a freak deal.”

Haagsma is using the difficulties in the last race to steel his resolve for the 2019 season. Haagsma plans to step up next year, running 51FIFTY Polaris RZRs in both Pro Production and Pro Stock.

“All we can do is plan for next year and go for both championships,” said Haagsma, who won the titles in both 2016 and 2017. “We had a couple wins and a lot of podiums. I’m very proud of what we accomplished. Second is a still a big accomplishment. It definitely gives me motivation for next year.” 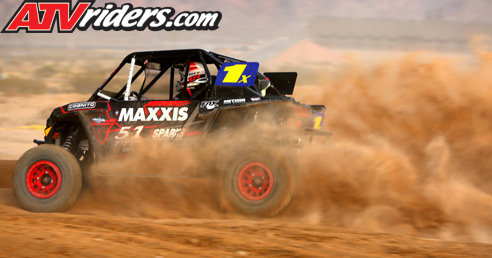 Haagsma brought in energy drink 51FIFTY as his primary sponsor this season, joining Maxxis and Polaris on his team. Haagsma is proud to bring a non-endemic sponsor to SXS racing.

“It always great to get sponsorship from outside the industry to come in and support WORCS,” said Haagsma. “They got behind me and will be helping me out even more next year. I’m excited about what 2019 will bring.”

Haagsma will be back in action, doing double duty in the Pro SXS classes, when the 2019 WORCS season gets underway January 26-27th back at Buffalo Bill’s Casino.