Lynden, WA (11/8/2018) – Ronnie and RJ Anderson drove their Holz-built Polaris RZRs to overall victories in the WORCS season finale in Primm, NV, while Cody Bradbury and Beau Baron clinched the Pro championships in their Holz rides. Corbin Leaverton finished third overall in the finale, and he finished second in Pro Stock points.

The event featured two races each for the Pro Production and Pro Stock classes run on the Lucas Oil short course and the venue’s desert course. The races were held in one day at Buffalo Bill’s Resort and Casino.

The Anderson brothers outclassed the fields in their respective classes. RJ Anderson finished second in the Pro Production short course race in his Holz-built Turbo S and snagged a victory in the desert event.

“It’s pretty rad to go 2-1 on the day,” said RJ Anderson. “I had a little hiccup in the short course race, but you live and you learn. We bounced back and got a win in the last race of the year. It’s great for my brother and I to come out here in our RZRs and go 1-1.”

Ronnie Anderson drove his Holz RS1 single-seater to a pair of victories on the day. Primm is his favorite track on the tour and it showed with his dominant runs. 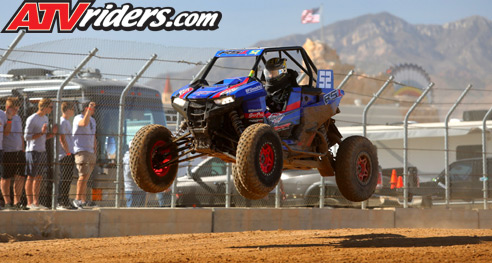 “It feels great to pull of a 1-1 and the overall win here at Primm,” said Ronnie Anderson. “This is my home track and I love it here. I charged really hard and paced the leaders. I love the combination of short course and desert. I think we need to add more of these events next year.”

Bradbury finished third in the short course race and he netted an eighth-place finish in the desert event. Tt was enough for him to clinch the Pro Production title. Bradbury has been a Holz customer since 2017 and he plans to stay one for the foreseeable future.

“Holz came on board at the beginning of 2017 and he’ll be back next year,” said Bradbury. “He builds a great car that is really hard to beat. He builds a race car in a box and it’s a good competitive one that he can ship to my shop and I can assemble it.”

In Pro Stock, Baron capped off his dominant season by clinching the championship. Baron has now won a record 10 WORCS titles in ATV and SXS competition.

“Locking up the championship at the last race is a lot of stress,” said Baron who went 5-7 in the finale. “I just drove my own race and got to the finish.”

Leaverton decided late last year to compete full time in the WORCS Pro Stock class. In the finale, he ran a Holz car for the first time. He was so impressed that he will have Holz build an RS1 for him to compete for the 2019 Pro Stock title.

“This was my first time in a Holz car and I loved it,” said Leaverton. “I’m glad to be running a Holz car next year. They are the best in the business.”

Look for Holz Racing Products Polaris RZRs to continue to dominate when the WORCS SXS classes kick off the 2019 season January 26-27th back at Buffalo Bill’s Casino.

About Holz Racing
Incorporated in 1995, Holz Racing Products has since been designing, innovating and manufacturing the highest quality and best performing suspension and chassis components in the industry. Our commitment to quality and our no-compromise design philosophy is what keeps Holz at the leading edge our industry; Performance and function first.